Founded in 1911, SDX (formerly the San Diego Ad Club) is San Diego’s oldest operating business association. In 2019, it transitioned to be the city chapter of The One Club for Creativity, an international non-profit whose mission is to support and celebrate a global creative community. The One Club is best known around the world for its award shows, The One Show, The ADC Awards and Young Ones. Having a local footprint in San Diego was aimed to bring a new level of exposure to the quiet, sometimes overlooked, beachside city, along with the opportunity to elevate educational programs and unify the arts.

Three months prior to launch, we sat down with San Diego’s marketing director, Yari Freeman, to go over the ins and outs of what this change would bring. Membership had been declining and the energy around the advertising industry in San Diego was changing. As the first West Coast chapter, this new shift was hopeful in bringing fresh energy and attention to the talent among San Diego’s creatives, not only in advertising but across multiple disciplines.

Change on the horizon also meant new branding, a revamped website and a party to celebrate!

To kick off this about-face we dove straight into the brand, creating a sub-brand specific to San Diego. This departure from The One Club brand is a first for any of its global chapters.

We stayed true to the essence of the brand by utilizing the bold, sans serif typography of The One Club paired with its predominantly black and white color scheme as well as its grid-like layout. To create contrast and to align with the relaxed, cool Southern California vibes, we replaced the secondary color palette with a soft orange and teal.

Throughout the process, it was our goal to create branding that would wink at The One Club’s modern take on classic design while also allowing the personality of San Diego to shine through. 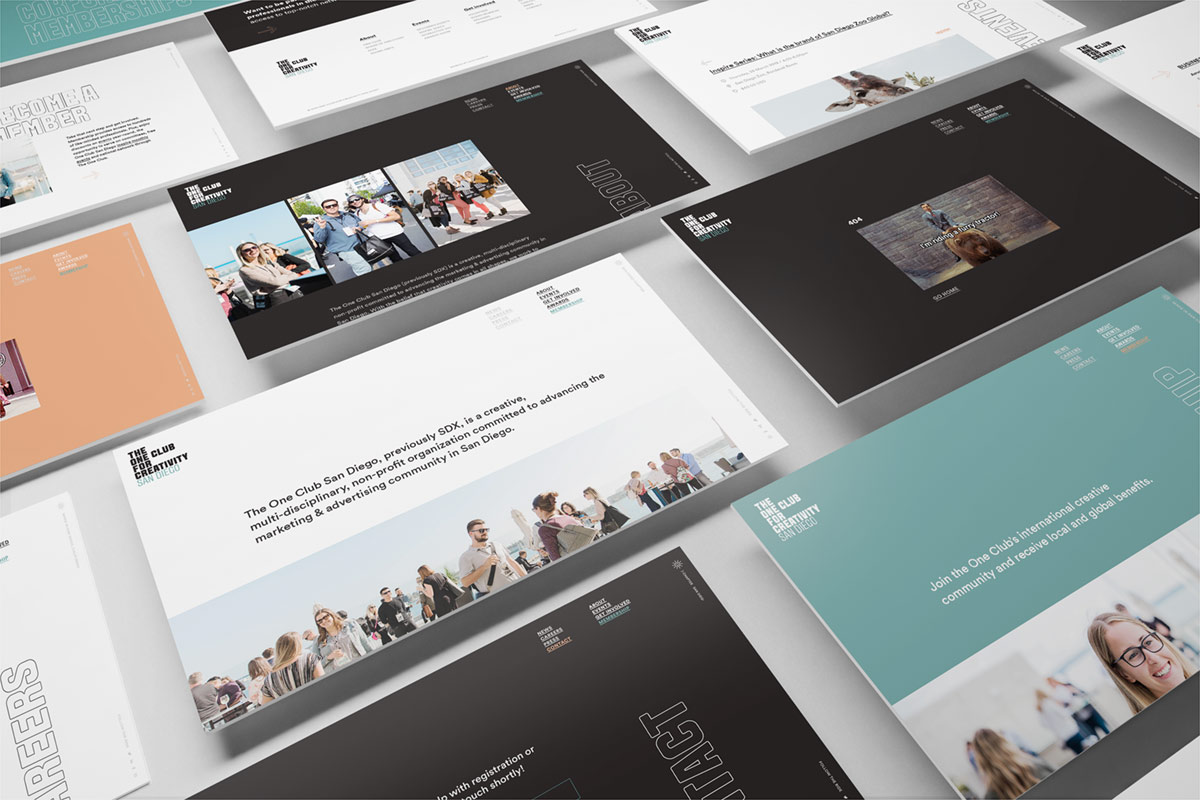 Overhauling The One Club San Diego website was our biggest project. Knowing the audience would surround the creative community, we pushed the boundaries to create a fully customized and unique digital presence from the ground up. The primary focus was to educate users and revitalize the energy around the organization with the hope to not only increase awareness, but to encourage participation as well.

Freshly designed animated features, a clean aesthetic, and fluid content organization was integrated in order to better appeal to the creative user.  To further elevate the user experience, we also created fun, scroll-based animations and micro-interactions using BarbaJS and GSAP. We utilized the scrolling feature to not only break down the content into more digestible pieces, but to encourage the user to keep moving and to stay on the page longer.

Heading up to the transition also came with the responsibility for generating buzz around the new launch. We created the look and feel for the event, establishing brand guidelines for additional collateral to follow and using the new brand colors, we set out to use this opportunity to connect the color palette with San Diego. After creating the brand, local agency, Movetic, took over the launch party collateral to design social media countdowns, tote bag and signage.

In the end, reenvisioning The One Club was a team effort with the collective vision to put the San Diego creative community on the map. We’d like to think it’s got a good head start.